Google kills off the Captcha, ensuring humans don’t need to see the most annoying thing on the internet 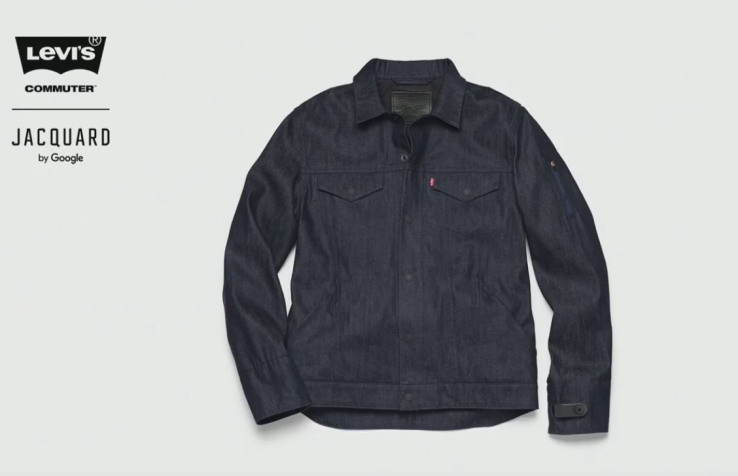 Wearable technology once promised to take us away from our phones and to improve our lives in subtle but powerful ways. The reality, however, has been a bit less exciting. More often than not, devices have been hampered by clunky design and bad taste, resulting in products that are expensive, unnecessary, and ugly. Yet it’s these drawbacks that highlight just how interesting Levi’s new connected smart jacket is — and why it’s a bolder and perhaps more promising form of wearable tech.

The jacket, which Levi’s brought to SXSW this week in Austin, is made in partnership with Google’s Project Jacquard, a division within the company’s Advanced Technology and Projects, or ATAP, group. The Jacquard division pioneered conductive fibers that are woven directly into clothing, so that motions you make on the left cuff of the jacket’s sleeve register as touch inputs, as if it were a screen. Those are then sent to your smartphone via a Bluetooth attachment that clips on as a cufflink. The conductive fibers are flexible and can be washed — though the actual electronics are handled by the cufflink, which you have to remove before you wash the jacket.

Originally due out in this spring, Google and Levi’s delayed the product to some time this fall. It’s unclear exactly what the issue is, as the jacket has been shown off fully formed and functional numerous time in the past. But the mobile app, which was only half-finished at Levi’s demo station here in Austin, might be the culprit. Some functions were grayed out and I imagine that while the jacket is designed, ready, and producible, the overall software might still need some ironing out.

“We’ve been going through continuous consumer wear testing to refine the jacket and its abilities,” a Google spokesperson told The Verge. “We want to be sure we take the time to get it right and provide a great experience for people.

At $350, Levi’s is positioning the product as a pricier-than-normal jean jacket for cyclists who want to get map updates or change a song on Spotify while they’re riding, all with taps and swipes on the sleeve. Google and Levi’s hope to add more functions down the line, but right now It’s pretty minor stuff. At the moment, you wouldn’t be wrong to see this jacket as something like the Withings Activité, which was nice-looking wristwatch that just happened to do some lightweight fitness tracking.

After trying the jacket on for myself and testing some of its features with a beta version of the mobile app, I’m starting to think it might have the most potential of any recent connected device. It’s not just that it’s a really comfortable and attractive piece of clothing, from a company whose jeans I wear pretty much everyday of my life. It’s also the fact that the jacket feels like one of the first truly practical pieces of wearable tech.

It’s a piece of clothing I’d be okay wearing almost every day, with functions that don’t profess to have a groundbreaking impact on your health or your well-being. It’s map updates and Spotify control in a stylish jacket, and that’s it. The tech is on its sleeve, but it doesn't wear the tech on its sleeve, if you know what I mean. As a bike commuter in San Francisco, where Levi’s bayside headquarters is located, this product was pretty much tailor-made for people like me. I’m constantly looking for ways to integrate interesting and helpful tech into my daily life without feeling like I have to go out of my way to use it.

I have an Apple Watch, and I thought it would make listening to music or navigating to a location on my bike easier. But it proved even more cumbersome to fiddle with a tiny watch screen at a red light than taking my phone out for 15 seconds, so I almost never use it for that (or really anything else except notifications). This is the dirty secret of wearable tech: it’s almost never more convenient than a phone. But a jacket that effectively has a invisible screen woven into its very fabric might just flip the script on wearables.

“When you go to dinner and see your people at their meals looking at their screen, or when you see cyclists accessing their screens for navigation and putting themselves at risk... to me, that really was the reason to do it, ” said Paul Dillinger, Levi’s global product innovation head, at a SXSW discussion on connectivity this past Saturday. “Not because of the dazzling capabilities, but because of the immediate need.”

Solving for a real problem we can observe, and not a perceived or invented problem, is the change in approach that gives the Levi’s jacket a greater feeling of utility. The software is pretty clean and customizable. You can tap on any one of the three available gestures — a swipe in, a swipe out, and a double tap — and map a touch interaction to that gesture, like skipping a song or getting a Google Maps update. Google says the app is still a work in progress, and it should get more gestures and more third-party support in the future. But right now it does what it was designed to do and that’s good enough.

I imagine some people will buy into Levi’s Jacquard jacket for reasons only partially related to the fact that it has conductive fibers woven into it. That might be exactly what successful wearable tech needs: a product that exists equally in both worlds, without pushing too hard on either its traditional function or its connected features.

A jacket is there to keep you warm and make an aesthetic statement about your personal style. The fact that this particular jacket does some neat smartphone-related stuff is a perk — not the core focus. That Google and Levi’s accept and embrace that turns a $350 jacket into a wearable device that seems well worth the price.